A watercolourist, particularly such a fine one as Walter J. Phillips, could not be satisfied for long with the black and white medium of etching.

In one of his unpublished manuscripts, Phillips states how he found the medium unsympathetic to his concerns. The dependence on line, crosshatching, etc., as a vehicle for his pictures, the dirtiness of printing inks and the smell of acids: all these things led him to seek another printmaking medium.

Because his thoughts were in colour, he decided to experiment in the colour woodcut medium. An article in The Studio was his only guide when he began his experiments in about 1917.

The first prints were remarkably successful for a person who was essentially self-taught. Dying Pines was the second print executed by Phillips in the colour woodcut medium in 1917. At this time, he depended very heavily on a bold key-block impression, with the other blocks cut for the different colours, according to this matrix. By 1920, Phillips had refined his technique substantially. Rushing River, Lake of the Woods is the twenty-first colour woodcut that he did. A sketch and a watercolour provide us with some of the steps that he went through in order to make a colour woodcut.

There are many similar drawings in the Glenbow Museum's collections that record Phillips's initial intentions. These bear his annotations as to colours, number of blocks required, etc. A preliminary watercolour was a step in the process: an effort to reduce the subject to five or six colours; sometimes more, and sometimes fewer.

The trip to England in 1924-1925 was an important step in Phillips's development as a colour woodcut artist. There he met William Giles and Yoshijiro Urushibara. Giles was the president of the Colour Print Society, and Phillips had corresponded with him previously. Urushibara was an exceptional technician in the traditional Japanese woodcut tradition, and it was from Urushibara that Phillips finally learned the finer points of sizing paper. This allowed him a much broader choice of Japanese papers. Back in Winnipeg, later in 1925, Phillips began to produce his finest work in the medium.

Prints such as The Field Barn show how Phillips could now do away with any key­block impression and even depict some subtle atmospheric effects. There soon followed the great prints such as Summer Idyll (1926), Mamalilicoola, B.C. (1928), Karlukwees, B.C. (1929), York Boat on Lake Winnipeg (1930) and Hnausa (1934).

Karlukwees, B.C. was derived from the first trip Phillips made to the West Coast in the summer of 1926. The snow was artistic license. One fascinating watercolour in the collection of John P.. Crabb of Winnipeg shows the same scene with an enormous ghostly Thunderbird rising above the mists of the forest over the village. The effect is stunning. Phillips was most interested in the Kwakiutl and Siwash villages which he reached by boat from Alert Bay. This trip, and other trips in the early '30s, provided him with material for many years and many prints.

York Boat on Lake Winnipeg (1930) has always been one of those 'essential' Phillips prints. Here the bold outlines of a key-block are used to great effect. More lines, bolder still, cut with an eye for rhythm and movement, capture the rolling water on a windy day. The pines on the small island in the background, the full sail, the tautness of the backstays, as well as the Indian's headdress all participate in a scene of incredible movement.

The collector of Phillips's prints should be guided by a number of factors in his or her acquisitions. Many dealers are unaware of several of these factors in their own purchases, but these factors are important in setting a price.

It is far better to get an unsigned colour print that has never been framed or always kept in a portfolio, or at least not exposed to strong light for extensive periods of time. The colours should be as good as the day they were printed and the experienced collector will soon learn to recognize that incomparable and unique surface quality. When buying an unsigned print, the buyer should ascertain its authenticity through provenance, which a good dealer is always pleased to provide in writing. A pencil signature is not a guarantee of a good impression.

In Phillips's colour woodcuts, editions can run as high as 500, and if the prints are numbered, the collector will have a ready indication of rarity. While some prints were not produced in numbered editions, Phillips always produced 'extras' for family and friends, which one might refer to as his 'artist's proofs,' in the numbered editions. The lower numbers are not necessarily the better impressions or proofs as is the case for drypoints and etchings.
There can be great variety in colour from one print to another, since in the colour woodcut technique, each of the many blocks receives its own brushing of water soluble pigment. The artist can change the colours within an edition and often does.

Many prints were offered in portfolios (between 1927 and 1936), and these portfolios can sometimes be acquired. The collector should make sure that all the prints are there and bear the same number.

Many of the editions were recorded, but many were not. In some instances, a print was issued twice, usually in a different state. Every year between 1918 and 1958, Phillips sent a print to family and friends at Christmas time. Some were produced especially for the occasion, and some are reissues of earlier prints. An existing mailing list from 1927 suggests that a little over 100 people received such a form of greeting. By the late '40s and '50s, the list was about 300. These editions are an indication of the rarity of the print. No doubt many people disposed of these as one disposes of most Christmas cards eventually.

Purchasing Phillips's prints with confidence may seem risky, but a knowledgeable dealer is the best security, as always. Prices will vary greatly, and the lowest price is not usually the best price to pay, while the highest will require some justification.

As there are many Phillips prints from which to choose, one may wish to collect by theme. For instance, a collector in British Columbia could collect all the West Coast subjects. Investment potential is excellent, and auction prices may reach new levels with increased interest and demand. Excellent proofs of Karlukwees, B.C., Mamalilicoola, B.C., the York Boat, Summer Idyll and Hnausa, among others, can fetch over $10,000 on the retail market, while some of the smaller prints hover around the $1,000 mark.

In a time when good technique and craftsmanship are beginning to be prized again, it is unlikely that interest in the colour woodcuts of Walter J. Phillips will decrease. Any Phillips print collection should include his wood engravings. These excellent prints will be the subject of next month's article. 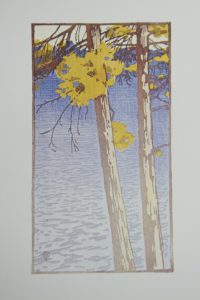 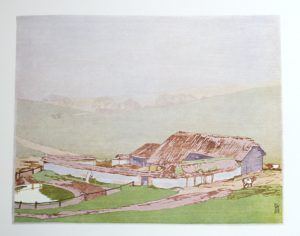 The Field Barn by WJ Phillips 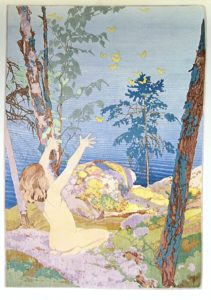 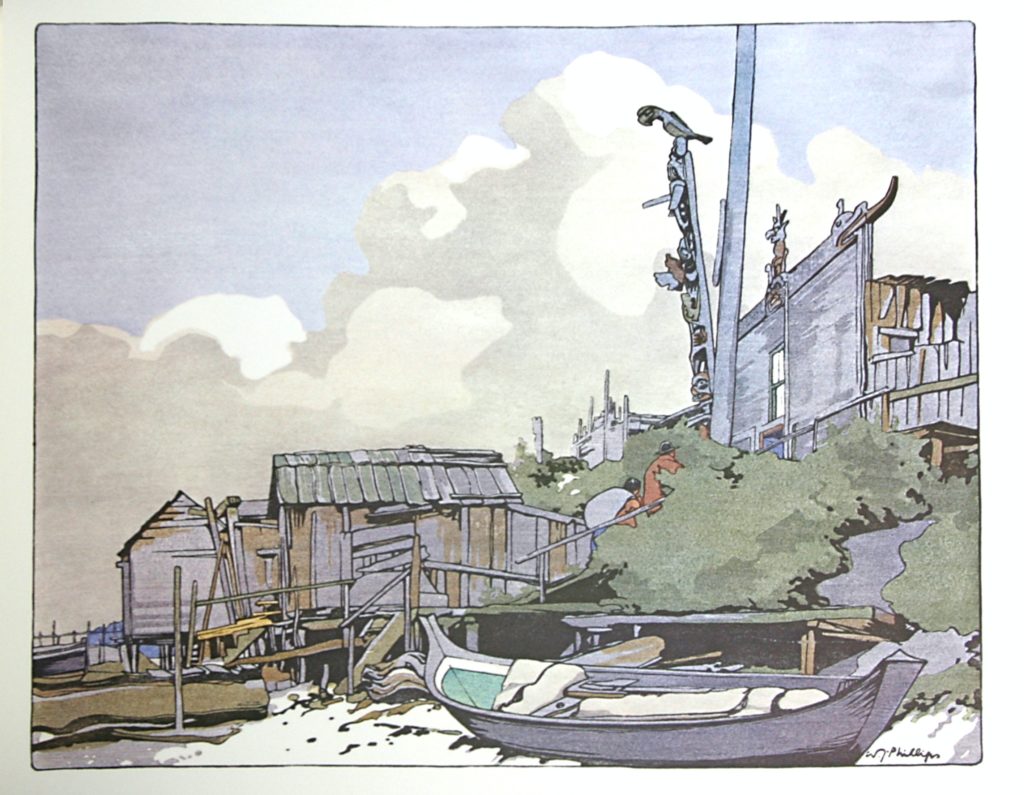 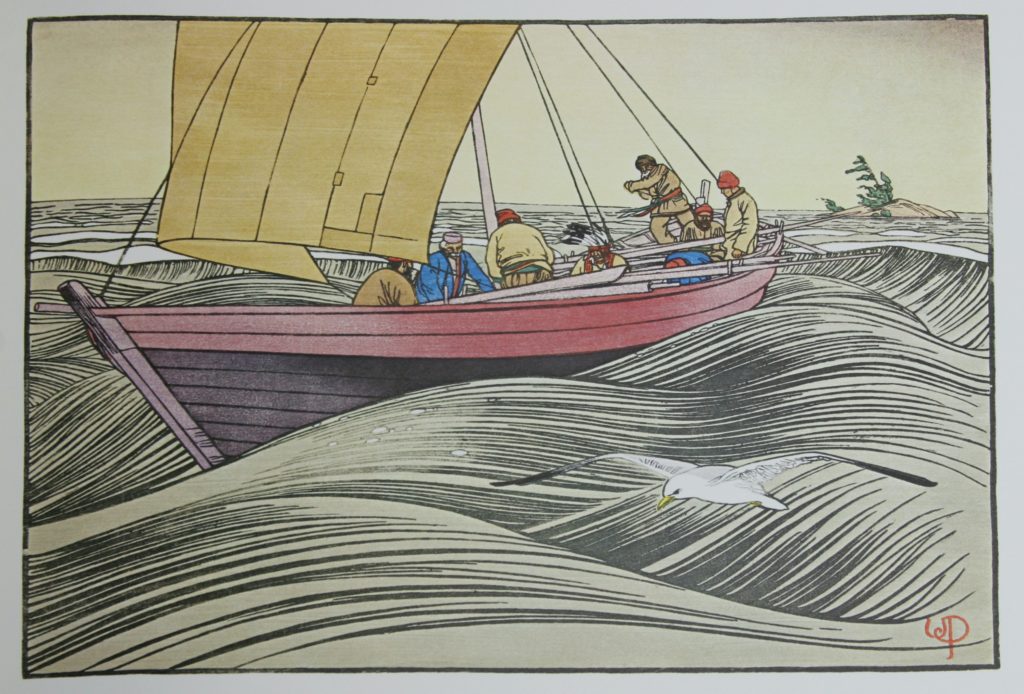